OUR LEADERSHIP MAKES A DIFFERENCE ONE VISIT AT A TIME

GOMED is a business that has been grown and staffed within the local community and we feel very passionately about the connection between quality of care and quality of life. Better and more accessible medical care impacts every aspect of our well-being; from physical and mental strength, to financial wellness. It is through these cultivated relationships within the communities we serve that we strive to make a difference to the collective health of our neighbors, one visit at a time.

Dr. Edens was born in Virginia and moved to Georgia in 1974. He attended the University of Georgia for undergraduate work and then moved onto the Mercer School of Medicine. After school, he did his Emergency Medicine Residency at Emory from 1995-98. Dr. Edens has trained at Emory Hospital, Grady Hospital, Emory Midtown Hospital, Egleston Children’s Hospital, and Hughes Spalding Childrren’s Hospital. He has served as the medical director for several hospitals around Georgia and is currently on staff at Piedmont Healthcare. He is also the track physician for Atlanta Motor Speedway and Road Atlanta.

Chance grew up in Bonaire, Ga and attended The United States Air Force Academy. Upon Graduation in 2004, he commissioned as a 2nd Lt in the Air Force and continues to serve today as a C-17 Pilot in Charleston, SC.  Chance garnered his master’s degree in Organization Leadership from Brandman University in 2012.  Chance’s diverse background as a collegiate coach, pilot, and administrative officer brings instant credibility to GOMED’s unique business model and practice.  He’s excited to develop and bolster GOMED’s presence regionally! 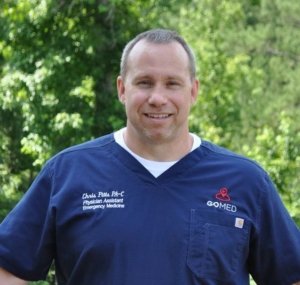